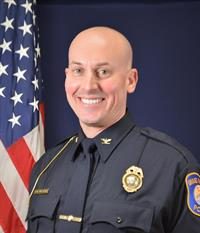 Eric Winstrom began his tenure on March 7, 2022. Prior to being named as the 15th Chief of Police for the Grand Rapids Police Department, he served in the Chicago Police Department (CPD) for over twenty years in various patrol, tactical, investigative, and administrative positions. At the time he left Chicago, he was an executive on the CPD Leadership Team and led the Area 5 Detective Division where he oversaw a staff of 200, including 40 homicide detectives. Geographically, Area 5 covers approximately one-fifth of the City of Chicago including the Northwest Side and O’Hare Airport.  His previous assignments included teaching at the Chicago Police Academy, heading CPD’s citywide child sex crimes investigation unit, serving as a supervising attorney in the legal affairs division, assisting in the creation of the office of reform management, overseeing policy and procedure for the department, and serving as captain of the 400-person 9th District Station. He holds a BS in Administration of Justice from Rutgers University and a Juris Doctor from Brooklyn Law School. Chief Winstrom is a court-recognized expert on police policy, use of force, criminal investigations, and the Fourth Amendment.