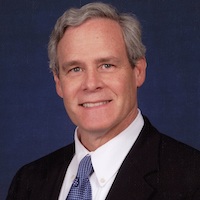 Gleaves Whitney, who has served as director of the Hauenstein Center for Presidential Studies at Grand Valley State University since 2003, was chosen to fill the role of executive director for the Gerald R. Ford Presidential Foundation (GRFPF) effective Sept. 1, 2020.

Credited with establishing the first sustained and comprehensive common ground initiative in U.S. higher education, Whitney received a National Endowment for Humanities grant for the program. Through his leadership, the Hauenstein Center has hosted major conferences that have helped revive the study of Midwestern history and launched the nation’s first presidential question-and-answer column, “Ask Gleaves.” He also developed the Peter C. Cook Leadership Academy at the Hauenstein Center, which now has more than 400 alumni serving in communities around the nation.

Before joining the Hauenstein Center, Whitney served in Michigan Governor John Engler’s administration as senior writer, chief speechwriter, historian, and assisted in the creation of the Michigan Department of History, Arts, and Libraries. He earned a bachelor’s degree in social sciences from Colorado State University, Fort Collins; and a master’s degree in history from the University of Michigan. He was presented with a Doctor of Humane Letters from the Dominican School of Philosophy and Theology, Berkeley California; and was selected as a Fulbright Scholar to West Germany (1984-1985).